This enables platform users to script and automate repetitive actions, as well as build their own applications and integrations on top of our unique big data storage and analytics technology.

xyzt.ai is the go-to intelligence platform for no-code spatial and temporal analytics at scale. The software used to solve the most demanding geo-temporal analytics problems for maritime, mobility, and smart city applications.

The platform is built on an innovative hyper-scalable cloud architecture that makes extracting insights from movement data such as GPS data from cars, vessels, plans, or time series data from IoT sensors, a breeze, even for billions of data records.

“We provide a beautiful and highly interactive web application to visualize, analyze, and report on the insights from big geo-temporal data. This web frontend is fed by our cloud platform which ensures scalability even for the most challenging data sets. Our customers can now interact with the backend themselves through an open API to automate tasks, perform analytics through scripting, and to build their own applications.”

xyzt.ai now provides an extensive and secure API that users can use for different tasks, such as creating new projects, uploading new data sets, performing data analytics queries, and even automate full visual dashboard creation for reporting and embedding.

The API is OpenAPI compliant which makes that code-generation tools can be used to automatically provide libraries to interact with the xyzt.ai API in your favorite language, such as Typescript, Python, Java, and more.

A new tutorial shows how, with just a few lines of code, users can automate otherwise complex interactions and data queries.

“The API is already used by our customers to automate data ingestion for example for real-time public transport delay monitoring. Or for automating new project creation, data upload, and dashboard setup for each new deployment of a smart city IoT provider. The API is a game-changer for our customers, as it enables them to integrate our platform even better in their own data pipelines and applications.”

With the API, users can significantly gain time and effort and build solutions that, for example

All these applications of the API are already used by xyzt.ai customers in the mobility, maritime, and people flow domain.

xyzt.ai is a high-tech location intelligence company that brings its users actionable business insights through a cloud-based SaaS platform for visualizing and analyzing big movement data from any moving assets, such as a car or vessel, or time series data from non-moving sensors, such as a camera or air quality sensor.
It does so in a unique and effortless way: Customer setup takes less than a day, there is no custom development needed, and insights can be obtained in an interactive way, even for billions of location records.

xyzt.ai is supported by Plug and Play Tech Center, one of the largest accelerators in the world with headquarters in Silicon Valley, by Flanders Innovation & Entrepreneurship and Flanders Investment and Trade.
xyzt.ai is named as an IDC Innovator for offering ground-breaking location and geospatial intelligence solutions and is part of the Global Top 100 Geospatial Companies selected by Geoawesomeness.

More information is available at www.xyzt.ai 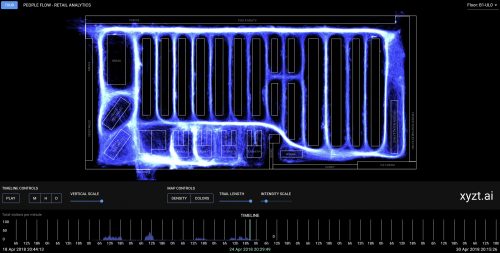